In the Spring of 2007 we were in Pisa with Rosanna and Vito. We were going to pick up their daughter Anna Chiara so that we could go to the coast for the weekend. On the way they showed us Pisa and the apartment La Volte.  Since then we have had to alter a cultivated prejudice against Pisa.

In the province of Livorno they always say „Pisa, you go there and come back straight away” or, ”meglio un morto in casa che un Pisano al uscio” ( which means more or less “better a dead man in the house than a Pisan in the doorway”!)

So Pisa pleasantly surprised us.

The apartment La Volte is in a small street called Contrade San Guiseppe surrounded by 4 churches, and only 5 paces away from the original authentic way of living inside the city walls “dentro la mura”.  Students and scholars laughing and joking their way to their lessons between women with bunches of flowers and their market shopping, cyclists in the pedestrian zone twisting their way between the business men with their mobile phones glued to their ears, all generations are present in the turbulent comings and goings.  Vito lead us to „Salsa” just before 12 o’clock -  that is really a café, the oldest and most famous pasticceria in Pisa (since 1831). They have been producing the most delicious sweet things since then, and not only cakes and biscuits, but all the small and delicious Italian nibbles that we just dream of and that just dissolve on the tongue.  At midday it turns into a small but fine restaurant and in the afternoon a „Sala da Té”.

When Lorenzo was 7 and the family lived in Pisa, he went on a tour of the Pasticceria Salsa with the school, where they were shown the baking rooms and ovens.  Lorenzo was extremely impressed and found it all so interesting that he wrote a wonderful essay about it and got a very good mark for it.

After our visit we were also very impressed with the elegance, tradition and deliciousness of the produce.

Here you will find information about all the houses in Pisa 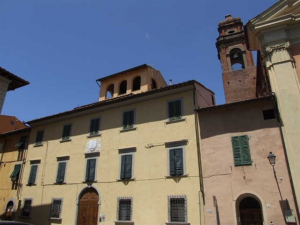